A dive shop in South Florida is one of the first businesses in the state to file suit against its insurer for the denial of a business interruption claim initiated because of the current coronavirus pandemic.

We are pleased to announce our first CE Webinar for 2020! 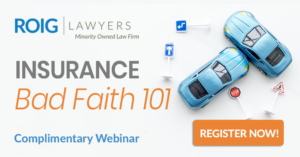 This CE is approved for 1 credit for Florida adjusters.

More than $800 million in additional auto liability claim payments were made in 2013 as a result of Florida’s third party bad-faith lawsuit environment.

Those findings were revealed in a recent study—“Third-Party Bad-Faith in Florida’s Automobile Insurance System”—conducted by the Insurance Research Council (IRC). This translates to an average of $79 in additional claim costs for every insured vehicle in the state.

From 1995 through 2013, Florida experienced a striking increase in the frequency of bodily injury liability claims and a significant jump of 68 percent in average claim payments per insured vehicle, according to the report.

Compare that to other large no-fault states that do not authorize third-party bad-faith lawsuits against insurers, such as New Jersey, New York and Pennsylvania, where notable declines in liability claim frequency and much smaller increases or even declines in claim payments per insured vehicle were found.

A contributing factor in Florida’s growing problem with third-party bad-faith lawsuits is believed to be the “apparent failure of the no-fault system’s tort threshold to limit access to liability reimbursement under most auto insurance policies,” according to the study. Other no-fault states’ systems are designed to limit the number of liability claims that are filed for reimbursement for lost wages and medical costs.

“The virtually unrestricted ability to file a third-party bad-faith lawsuit against an insurance company poses a serious threat to Florida’s auto insurance system,” said Elizabeth A. Sprinkel, CPCU, senior vice president of the IRC. “The possibility of winning large bad-faith settlements and court judgments creates powerful incentives for potential claimants and their attorneys to file auto liability insurance claims that otherwise would not be filed.”

The IRC said that it will be doing more research related to the impact of Florida’s tort threshold and other important aspects of the no-fault system and will publish those findings later this year.